skip to main | skip to sidebar

Give a holler at Ayun Halliday dot com.
You'll be in touch with the entire staff of The East Village Inky faster than I can type "Jetson Tube".
Posted by Ayun Halliday at 3:58 PM No comments:

The Internet won't let us go home until July! 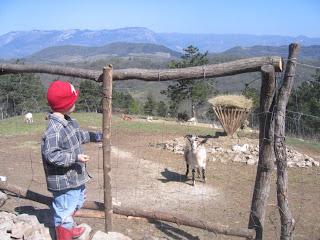 Did I mention that I'm parcelling the trip out piecemeal to Babble? Got to cover my heiner when Uncle Sam's reviewing all the receipts I plan to claim on our Schedule C, come tax time. I'm cagey like that.

The current trip report places us in Stanjel, Slovenia. Eight more to go until the editors let me go home. (I'm hoping before they do, they'll change my unauthorized author photo, which is six years out of date, and shows me rocking a crewcut and some overly obvious postpartum pounds.)

Lest our snail's pace threaten to outrun your attention span, remind yourself to click Babble's Entertainment and Travel section on a weekly basis, where we're packaged as Travels With Baby.
Posted by Ayun Halliday at 4:28 PM No comments:

Want to know what we really thought about what we ate?

Dirty Sugar Cookies has the PG-13 for language scoop!
Posted by Ayun Halliday at 6:49 PM No comments:

an update on the trip by india

The money has pictures of young men on them. not presesedents. kings. kings from certin times in history. the coins can make a dollar, and almost all the coins are silver. they say 'markes' instead of dollars and cents.
no Abe. no native.
there aren't any places like chuckie cheese, but there are many fast food stops.
no sighn of any coconuts.
the bungie jumping was great! there was a boy who actually flipped! i repeat flipped, in the harness in the air!!!
no snakes yet.
many people do speak english. they learn it in high school.
i have no idea about fencing in budapest.
my best descovery is a secret box in the market. i'll bring it in! (as well as the candy you asked for!)

Back where we started.... 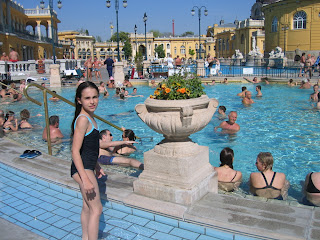 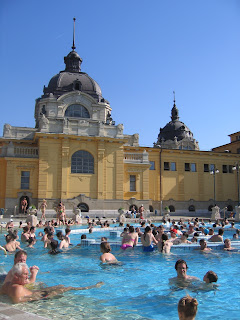 ...at the Szechenyi Thermal Baths in Budapest. This time with smuggled-in camera. What I wouldn't give for one of these in NYC...

Stay tuned for more posts from Greg (on being stopped twice by Serbian traffic cops), Inky, and who knows, maybe even our red-booted Balkan Boy. Plus summations of what to take / what not to take / favorites / least favorites / and what we're glad to be getting back to in a few days' time.

Thanks for all your comments thus far...
Posted by Inky and Milo at 11:00 AM 6 comments: 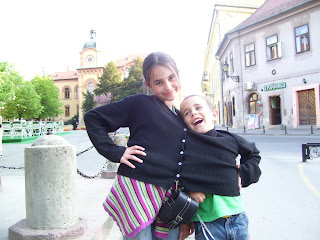 Our final stop before returning to Budapest is only ten miles away from Novi Sad. It's the perfect place for the trip's psychic ending, a small town in the middle of the rich Fruska Gora farmland. The Hotel Boem was tatty, but warm, and the owner seemed so anxious for the Americans to not find fault with the cigarette burned plastic shelf in the bathroom, lack of shower curtains, tvs, and other such ammenities that don't mean much to us, that of his own accord, he chucked us two rooms for the price of one! The hotel's right across from the Serbian Orthodox Cathedral, and as we were sitting at an outside table enjoying some delicious, paprika-flavored fish soup, I heard the first notes of what in truth I'd traveled all this way to hear - a brass wedding band. Here came the bride and groom, followed by a gypsy brass band and all the wedding guests. Heaven!!! They played several songs, then the wedding party disappeared into the Cathedral, while the band cooled their heels in the square, waiting for the ceremony to end. A triumphant, musical exit for the newly married couple, who promenaded up the street, accompanied by the musicians, passing en route, another brass band who were marching to meet a shiny black SUV swathed in orange ribbons, which divulged yet another bride, groom, and a swaggering best man, wielding a bottle in one hand, and a bunch of dinar notes as regular tips to the band in the other. Joy beyond description.

About a kilometer away is the Zinanovic Family's Museum of Beekeeping and Wine Cellar. It isn't often you get two perfect endings in one day, but sitting under a 180 year old tree, drinking wine from a 300 year old cellar, with a charming 7th generation beekeeping winemaker and his bride surely qualifies. The children amused themselves with a honey tasting, while Greg and I sampled the wine. Maybe one day I can return on Gourmet's nickel to write a food story about this family and some of the surrounding farmers. (I can dream). As we were walking to the museum, we were passed by a farm family in a horse drawn cart. Their children's eyes were as wide as our children's eyes. 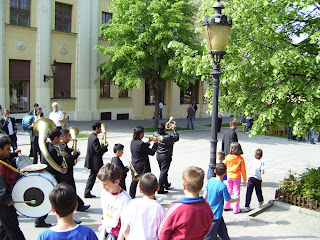 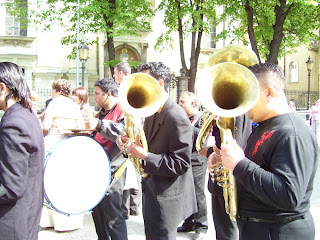 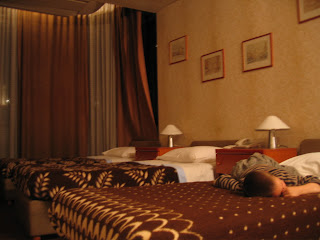 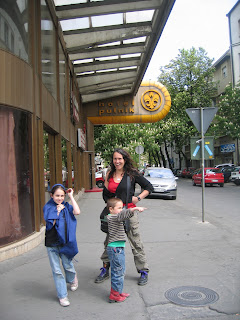 It wouldn't be a trip without a little No Touch Monkey action.

Way back in February, when I was toodling around cyberspace, hunting for a place to spend an Easter weekend holiday with the cousins, Novi Sad starting looking very attractive. It's just a few hours drive from Budapest and makes and excellent base for exploring the monasteries and fertile farmland of Fruska Gora. The photos of its town square held enormous appeal. It looked like a nice little manageable town where there'd be a few cafes and places for the children to run around, without aggravating a sophisticated urban populace. It wasn't until we were crossing city limits that I realized Novi Sad is Serbia's second largest city. And it has a shortage of affordable accomodation. And the tourist office, where one contacts aforementioned said affordable accomodation was closing in an hour. And we had to figure out how / where to park the car so it wouldn't get towed. And change money to pay for the parking.

We went to the youth hostel, right off the main drag, in yet another pedestrian zone. After locating the disreputable looking back entrance, we climbed five flights up, where a handwritten sign instructed us to ring the bell or call. We rang the bell. No answer. Before we could jot down the phone number, the lights in the hallway went out. The switch was (presumably) on the ground floor.

Then we went to the oldest hotel in Novi Sad, which the tourist office lady had said was fairly reasonable. It was no about 8:30 at night and the kids were crashing. The lobby reminded me of the place where we stayed in Sibiu, Romania in 1994. The desk clerk reminded us of our friend Matt Bardin, which may be why we threw ourselves at him, basically leaving him little choice but to take over for the now closed tourist office. He contacted some guest houses, but when we realized we weren't too equipped to find them in the dark, with a stricken, exhausted six-year-old, we followed his recommendation and checked into Hotel Putnik, which retains the state run flavor of Yugoslavia, 1974. (Presumably the last time the room was cleaned.) As anyone who's visited our apartment knows, my housekeeping standards are usually much less exacting than the average American's, but this is the one time in my life when I've felt compelled to protect myself with rubber flip flops. No way did I want the skanky extra blankets touching my children's skin. Also, the door did not seem to lock, so we propped it closed with a bag of toys. The bathroom smelled like after when you throw up, and you're hanging out with your head in the toilet, and suddenly you become aware of everything that goes on it that bowl. It made the Hotel Tibor in Sezana, Slovenia, look like something from a James Bond movie. Inky however, liked the glamorous make up mirror. And their Do Not Disturb sign is the best I have ever seen. I'll see if I can get a photo of it for you.

Then at four am, a party of drunken revelers came reeling up from the casino. I was dying to crack the door to get a look at them. Shouting men, singing women, bottles popping, everybody roaring with laughter and raunchy high spirits. It was like having the entire cast of Underground whooping it up on the other side of the thin walls.

Naturally, this cost much more than any of the lovely apartments in which we stayed. Though I think I'll remember it longer. An anecdote well worth the price. The kids weren't phased at all! As Greg said, this is the real deal.
Posted by Inky and Milo at 11:45 AM 3 comments:

In which the Big Monkeys do a little Research before leaving home...